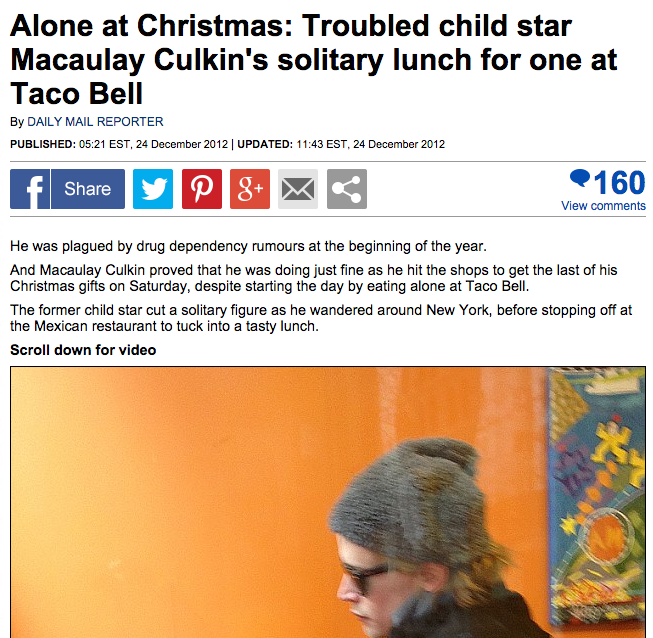 if you’ve been around here any length of time, you know that this is one of my favorite stories ever.

in part because it is AMAZING. in other part because, in the daily mail‘s ongoing epic reportage on the life of macaulay culkin, this tale is the first in an AMAZING 2012/2013 story-telling trilogy of “the sad, solitary, alone taco bell incident,” “the one time macaulay culkin was“healthy and happy” because he was seen carrying a hudson news bag at laguardia,” and “macaulay culkin gets a girl.”

you see how the narrative arc there is dependent upon “the sad, solitary, alone taco bell incident”? you see how crucial a crisis that becomes in retrospect?

well, actually, that’s a bunch of baloney about retrospect. for, this crisis was felt to be crucial at the time too.

look at the alarm bells:

ALONE AT CHRISTMAS! A TROUBLED CHILD STAR! A SOLITARY LUNCH FOR ONE! … AT TACO BELL! there is basically no word in this headline that is not intent on exciting our emotions.

i do rather wonder what taco bell ever did to the daily mail because they kinda come at them claws out. it is made very clear that it is not just eating alone that equates to hitting rock bottom. no. it is eating alone at TACO BELL. the horror.

and so if macaulay culkin is ok, it is in spite of TACO BELL.

and yet really the narrative thrust of this article is actually claiming that macaulay culkin is just like us!

because i have spent every day since 24 december 2012 writing a dissertation about how celebrities reflect the human condition and we are all going to die and, therefore, on some deep existential level, we are all alone, a fact which celebrities and the feelings of connection they engender helps us to evade/makes more palatable, of course, revisiting this ridiculous article now, i am like: RIGHT ON DAILY MAIL!!!

except i don’t really think that’s what they were getting at.

it’s important to note the shift that occurs here, between the 24 december 2012 report on the 22 december taco bell incident and the replay of that incident in the mail‘s culkin report of 13 january 2013. i’m arguing that the taco bell story is amazing and can stand on its own, but that it is also the first in a trilogy. and it is within this trilogy that it accrues new, troubling meanings.

in the 24 december 2012 report, we can conclude that macaulay culkin is just like us. like us, on 22 december, he went christmas shopping and ate lunch.

with the 13 january 2013 report, however, we are informed that, actually, this situation was dire and abnormal, a circumstance about which we have apparently spent the intervening weeks worrying.

key passage: “a lot of people worried… So when he landed in Laguardia Airport in New York on a flight from Miami on Saturday appearing more clean cut than he has in weeks the collective sigh of relief could be heard.”

thank god for this new set of photographs of culkin with the hudson news bag. otherwise, we might not have understood the full force of the images of him eating alone at taco bell. for it is within the story of “the one time macaulay culkin was“healthy and happy” because he was seen carrying a hudson news bag at laguardia,” that the story of “the sad, solitary, alone taco bell incident” assumes its full tragic dimensions.

this is also where culkin’s eating alone at taco bell is implicitly connected to his former relationship with mila kunis:

A NARRATIVE IS BEING BORN, ya’ll!!! a narrative that will come to full flower in “macaulay culkin gets a girl” later that year and continue developing in pretty much every article about culkin or kunis published by the daily mail since.

so where are we now?

he looks healthy, happy, and i covet his blazer. omg, what will happen next?? 2016 here we come…

2 thoughts on “time machine: that one time macaulay culkin was “solitary” and “alone” because he ate lunch at taco bell”