hey, remember that one time that we were all worried about macaulay culkin because he was eating alone at taco bell?

(and yes, we’ll be returning to j.tim eventually…)

and then that one time we stopped worrying because he was carrying a hudson news bag outside laguardia, a clear indication that everything was gonna be ok?

well, it’s been awhile since we’ve seen photographs of macaulay culkin and, therefore, had an opportunity to make thoroughly unsupported assessments of his emotional well-being… except, voilà!

so let’s take a look…

MAC IS SMILING! HE’S IN LOVE!

well, obvi. i mean, they’re wearing matching nailpolish and if that isn’t a sign of true love, i don’t know what is. plus, he’s smiling. but the real proof in the pudding lay in the fact that he has bought his ladyfriend a rose and stuck it in a bottle of water:

you know, when i was in college, someone sent me a dozen roses and i stuck them in a 2 liter of sprite with the top cut off. but that wasn’t so much a sign of our everlasting love as the reality of not owning a vase. just saying.

so how’s mac doing, now that he’s with this girl who everyone is quick to say looks like his ex just because she is brunette and wears ‘her hair down straight and parted in the middle, much like [mila] kunis’? well, for one thing, he’s way less shady.

THE DISHEVELLED CHARACTER WE’VE SEEN IN RECENT YEARS?!?! my god. i love paris. because i think only in paris would an eyewitness to mac’s rose buying give a statement like that to us weekly. amaze.

so yeah. macaulay culkin is in paris, smiling and holding hands with a girl who has brown hair. all is well with the world. except… this caption. 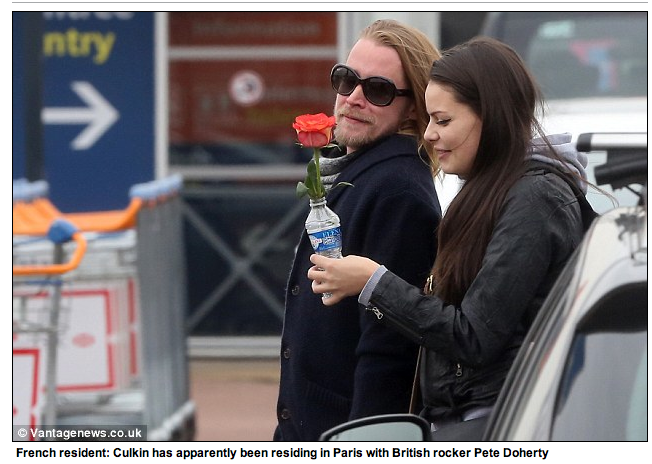 that’s a detail that has about it the air of brewing clouds and future christmas dinners at taco bell if ever there was one.

(all images from the daily mail)