i mean, we knew this day would come.

not to sound smug but it was quite obvious from that get-go that somewhere in the never-ending saga of you filming the unstoppable trainwreck that is the lifetime movie “liz and dick”, you would be called upon to attempt to approximate one of the most glorious moments in fashion history. namely, this: 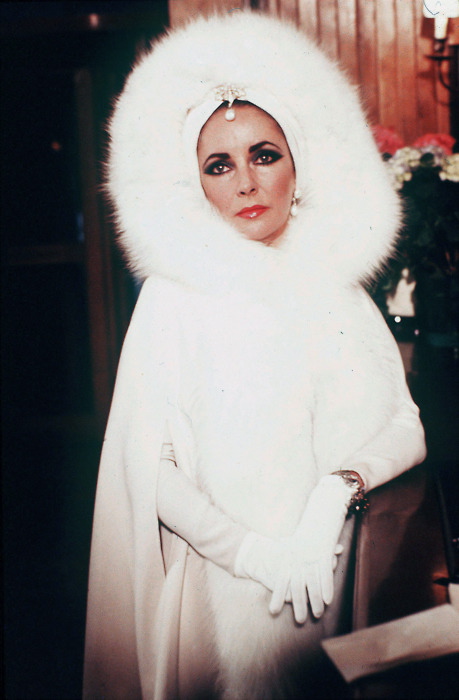 to be all joey russo for a moment: WHOA.

the cape, the gloves, the freaking diadem. while that getup would swallow a mere mortal like me, making it look like i’d been half eaten by that persian who hawks for fancy feast, somehow the mass of fuzz and white only serves to heighten her beauty. it draws you directly into the dark depths of those famous, heavily lined (seriously, how many pencils had to die here?), eyes.

somehow, she pulls it off.

that’s not to say she could pull off everything. this homage to davy crocket via hobbity lobbity and the raquel welch wig line, for instance, was a fail. 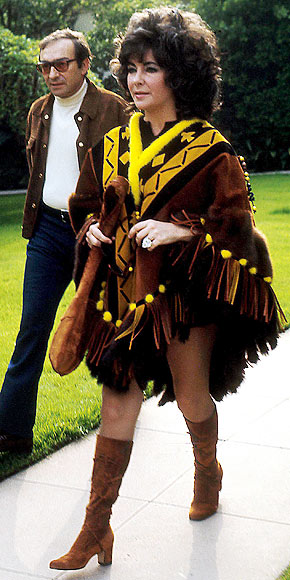 as was this floral monstrosity (which is still SOMEHOW surprisingly more flattering than it has any right to be):

not to mention the ensemble wherein she herself paid tribute to her own fashion history:

(omg, an entire epic poem could be spent in the attempt to deconstruct this outfit. where on earth is she and why is no one else around so well-equipped for winter? sonja henie didn’t don this much outerwear! are those over-the-knee patent boots?? ah, mine eyes!)

but really, who could pull those off? this was the 70s! an entire decade in which no one looked good. i admire her try.

oh yeah, we’re here to talk about you, lindsay lohan. here you are, in your third week of filming (second? fourth? since filming began, you’ve had a car wreck and a faux overdose and sparked union drama and your boobs fell out of your dress.

that is a lot ‘o drama for however many weeks it’s been and, honestly, it feels like the filming of the unstoppable trainwreck that is the lifetime movie “liz and dick” has been going on since the beginning of time).

question: are you a method actor, li.lo? are we to assume that you are deep into the character of liz by now?

that is a frightening line of inquiry…

i digress. mainly because i’d rather not confront this:

ahhhhhh. could that be any more budget? 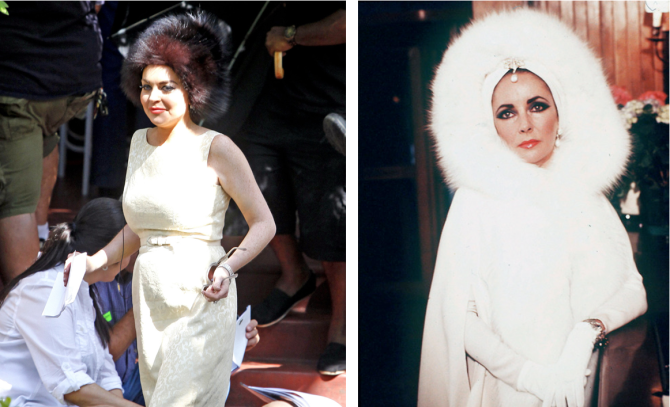 as much as i love crappy made for tv movies, lindsay lohan, i’m deeply frustrated that they’re so cheap. they fall so short. because 6 or 7 years ago, you could’ve made this movie. for, like, a real studio. and it could’ve maybe been not all that bad. as it is, it’s just a weird layover in between having been a successful actress and having blown every chance you’ve gotten.

dangit, lindsay lohan, you always make me go all sanctimonious and it’s my own fault. i think this is why: it seems kiera knightly is always cast to play all the famous historical and literary british heroines. you, in contrast, cast yourself as all ours.

still, i draw comfort from the fact that this remains a possibility: 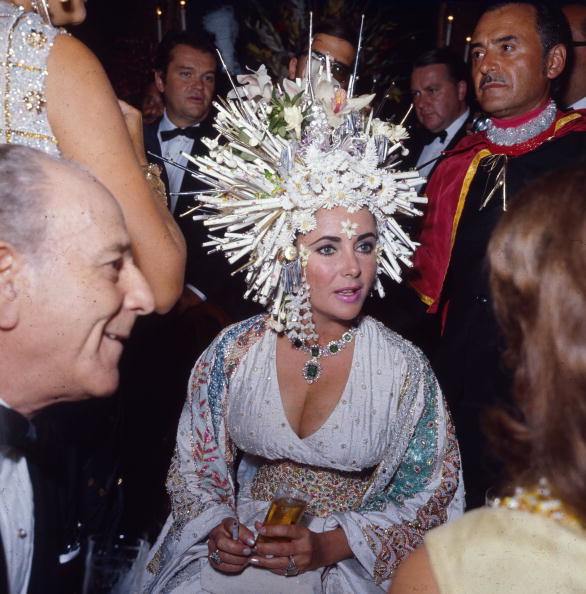