i mean, OBVIOUSLY, right? this is what you were wondering when you read “The Emails of Natalie Portman and Jonathan Safran Foer“? you were like, OMG, what would thomas stearns make o’ this??

because TSE is on everyone’s mind, non? 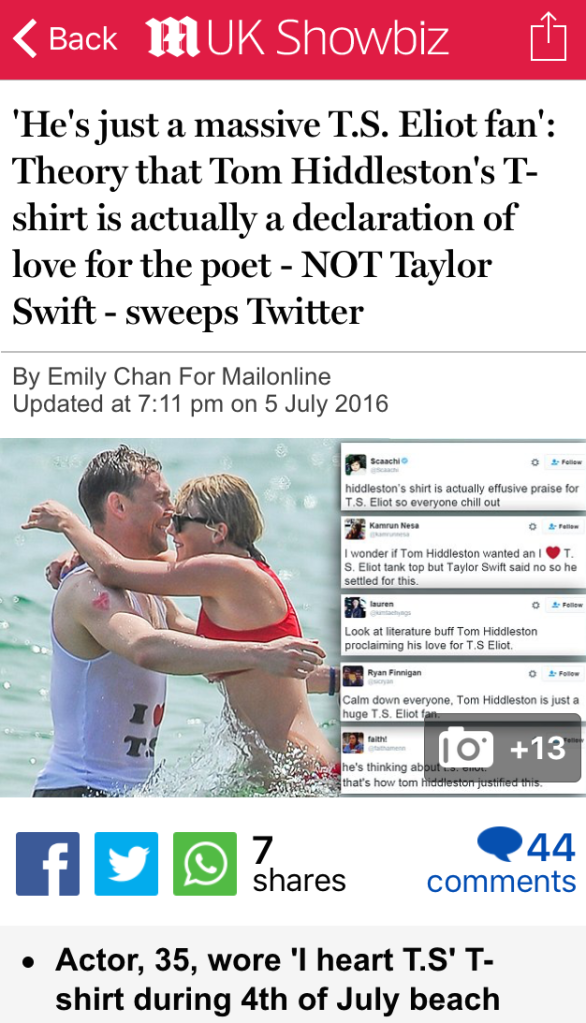 and because, for serious, this is a trio that makes sense…

so what’re we dealing with here?

well, on the one hand we’ve got “The Emails of Natalie Portman and Jonathan Safran Foer.” a piece published in the new york times magazine on 14 july 2016, wherein “the famous actress and acclaimed novelist open up their inboxes.” FOR US. FOR LITERATURE. FOR THE WORLD.

can you handle it? we’ll see.

the other thing we’ve got- because why the heck not- is “The English Poets as Letter Writers.” from volume 4 of the complete prose of t.s. eliot, it is a lecture delivered at yale in february 1933 and reconstructed from various people’s notes and a yale daily news account.

this is what we’re dealing with. what do i wanna do with it? use “The English Poets as Letter Writers” to illumine the literary quality of of “The Emails of Natalie Portman and Jonathan Safran Foer,” obviously. like you do. 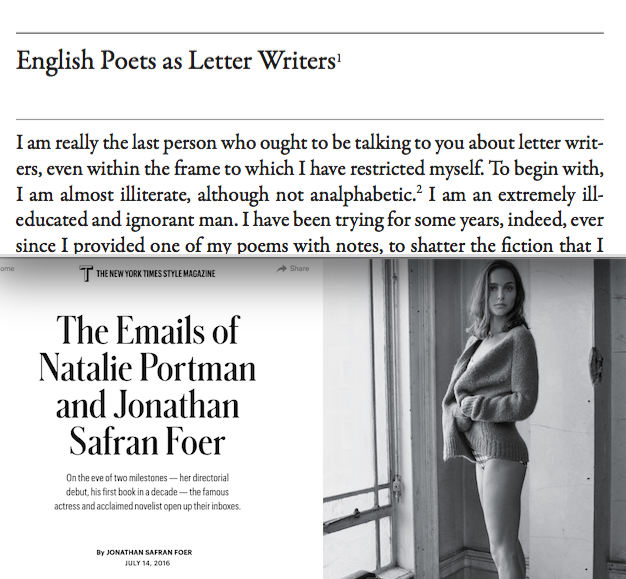 and away we go!

“The desire to write a letter,” Eliot tells us (warns us?), “to put down what you don’t want anybody else to see but the person you are writing to, but which yet you do not want to be destroyed, but perhaps hope may be preserved for complete strangers to read, is ineradicable.”

and, fyi, we’re going to assume for purposes of this discussions that emails are the new letter. thus we can conclude portman and foer’s desire to write these emails was ineradicable. as perhaps also was their need to share these emails with us.

firstly, why does foer get the byline while portman has to stand there forlornly in her underwear?

and wtf is this:

for anyone familiar with the 2014 gossip around portman and foer, this rings bells…

quickly silenced when we find out that, actually, it’s just the hotmail closed:

this hotmail thing is the central narrative tension of this who effing piece.

so much for narrative tension.

so much, also, for openings.

“We want to confess ourselves in writing to a few friends,” eliot observes, “and we do not always want to feel that no one but those friends will ever read what we have written.”

presumably that is the case here and, in reality, foer wants the whole wide world to read these emails. why else would he- great novelist (and i believe he is)- open “The Emails of Natalie Portman and Jonathan Safran Foer” with quite possibly The Most Boring Set-Up Of All Time… 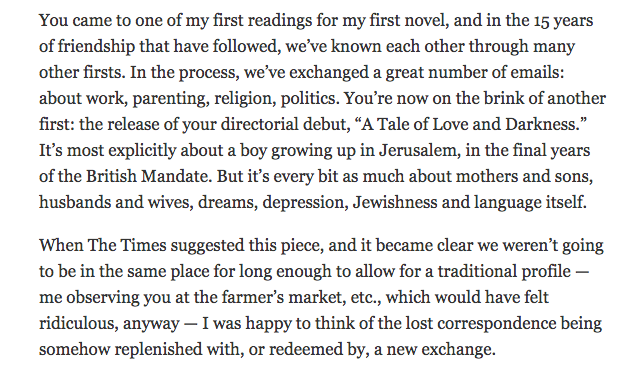 let me paraphrase: dear friend i’ve been communicating with for years. we’ve known each other awhile now. the times has commissioned a profile and i thought, omg, let’s be inventive and email.

this is, of course, exposition for our benefit. surely portman knows they have known each other awhile and the times has commissioned a profile.

i’m assuming that foer has whole-heartedly bought into TSE’s assertion that “No other form of communication can ever supplant the letter” and is trying to leverage that here. unfortunately, he seems not to have read “The English Poets as Letter Writers,” wherein we are informed that “Letter-writing permits us to forget ourselves and to express the worthwhile things that come spontaneously.”

there is very little spontaneity in this:

eliot’s point is well made here and my likening of letters to emails immediately falls apart:

“No other form of communication can ever supplant the letter . . . Letters in the future will be different from those in the past because they will be typed, but no good letter can be dictated; there must be no third person. Letter-writing permits us to forget ourselves and to express the worthwhile things that come spontaneously. It can be a provocation of and a consolation for solitude. Our minds should be left to wander when writing a letter, and a good letter will focus the reader’s attention on what the letter is getting at, rather than the letter itself.”

and this is, i think the difference between emails and letters. one wouldn’t think of eliot as spontaneous… 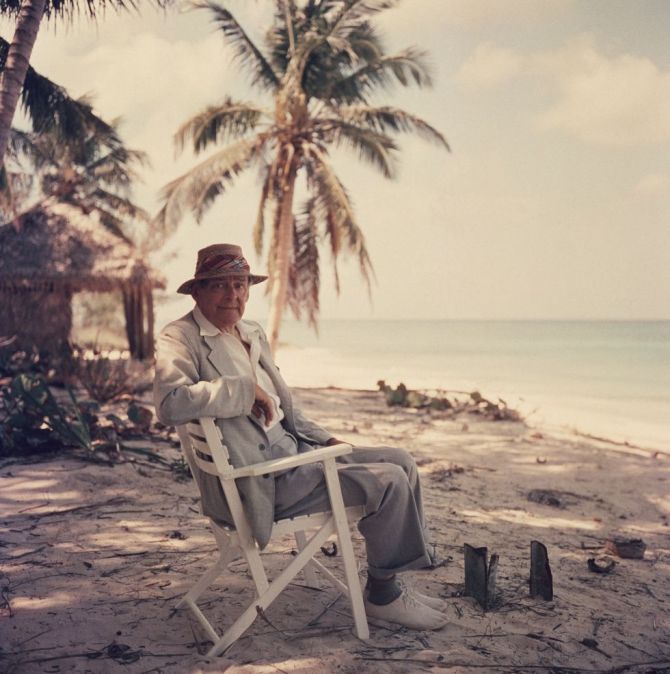 one wouldn’t think of him on a beach either, but the spontaneity he cites here is rarely present in an email, where we edit ourselves ruthlessly, refining what we’ve said, constructing it so that it may appear casually jotted off but is, in reality, refined in a way that letters seldom are.

portman and foer’s minds are not wandering here. they are performing. as we often do in email. as we do differently, i think, in letters.

the performance within a letter is, as eliot notes, more spontaneous. one can write with abandon. one can hide behind bad handwriting. one can get away with things said in a letter in a way that one cannot in “real life”. or type-written life either.

how much more interesting would these lines be written by hand?

or, how much more forgiving of them would you be were they written by hand?

hell, they could’ve been typed and then written by hand, but wouldn’t the appearance of first-drafty-ness that hand-written texts have changed the way we perceive them?

how much less ridiculous would this paragraph wherein foer reminds portman that the movie she has conceived of was based on a book be were we seeing it handwritten?

ok, maybe not. maybe this would still be much like the moment in a 1959 coffee klatch when jackie says to rose, “your youngest son teddy, as you know, is jack’s campaign manager…”because OF COURSE she knows. awkward. 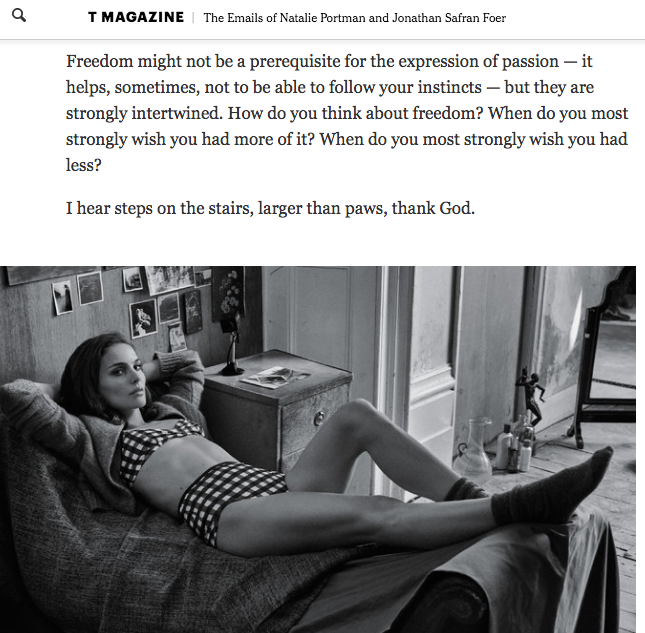 “An ideal correspondence, according to Mr. Eliot, will be with a person of the opposite sex,” the yale daily news reported, “not one with whom the writer is in love, for love letters are monotonous.”

portman and foer are rumored to have A History. this may or may not be true. the monotony of what they have written might suggest it is.

she reminds us that she is married. 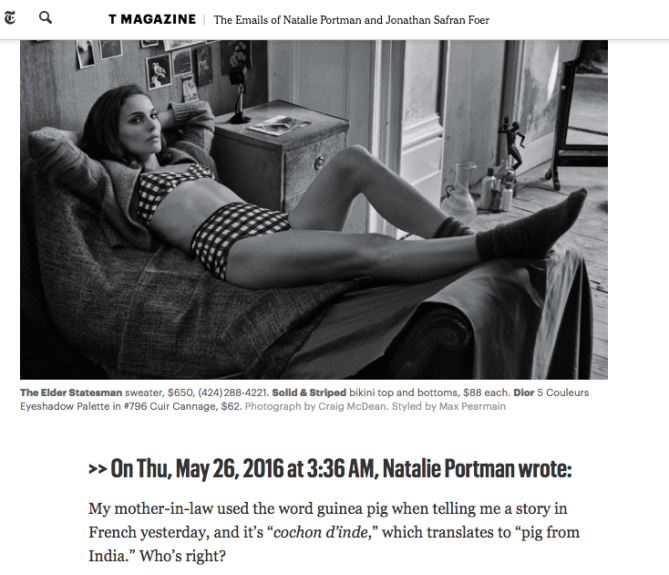 i wonder if, when foer struck upon this idea of  “The Emails of Natalie Portman and Jonathan Safran Foer,” a portfolio of portman modeling underwear factored into his vision.

and so we have a woman talking seriously about her work and her homeland whilst being shown lolling about in $375 bikini and comfy socks. 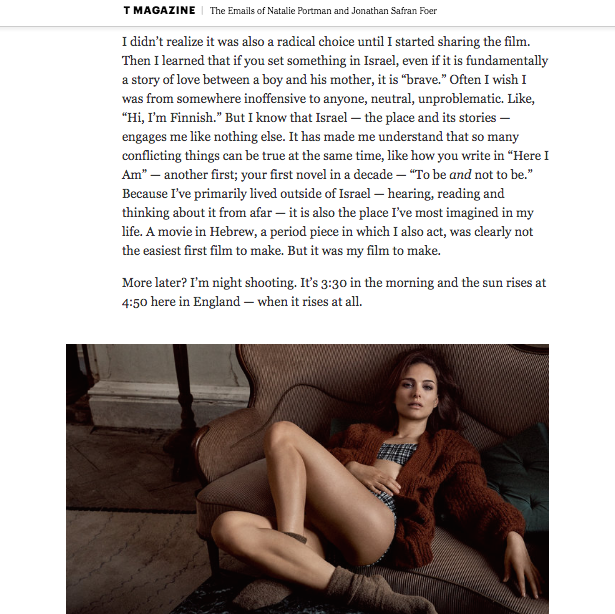 where are the glamor shots of foer? for”The Emails of Natalie Portman and Jonathan Safran Foer” is 50% foer. they are both selling things- her movie and his book. why does foer get the byline and portman gets the glamorshots? obviously because she’s an actress and he’s a writer, but they’re sharing the writing here. and her half is far more provocative than his.

behold: the wankiest email in this exchange… 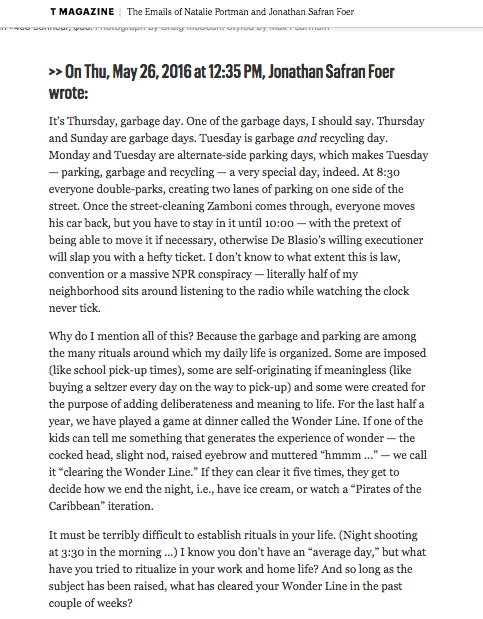 perhaps this establishes their closeness. the fact that foer feels comfortable banging on about the garbage collection for two paragraphs as a transition into the question of how portman ritualizes her work/home life. Eliot writes:

“The recipient of the letter should be a mature friend, sufficiently understanding so that a good deal need not be said, but not to the point where letters will be obscure to others. There should be sufficient sentiment to release the writer’s mind to speak freely, without fear of betrayal, for the greatest pleasure derived from letter-writing is being indiscreet. The two correspondents should have interests in common and should be able to be brutally frank.”

foer feels comfortable enough to admit to things he feels are “silly”:

and she reflects on what he has written… 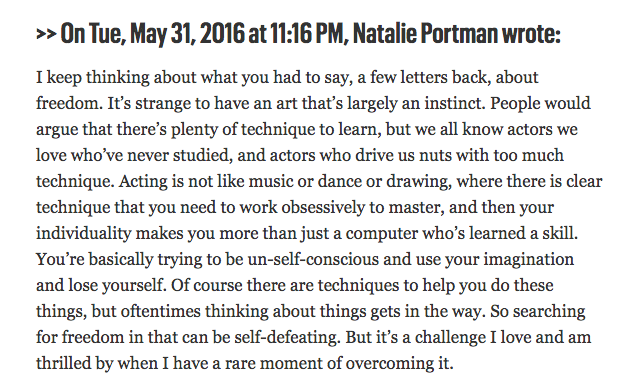 though we’re almost at the end, i’m going to stop here because eliot’s usefulness has ended- in the reconstructed letter, he’s diverged off onto talking about poetry- and we’re coming up on another spoiler in  “The Emails of Natalie Portman and Jonathan Safran Foer” which i do not want to give away.

so reflection: what has “The English Poets as Letter Writers” illuminated about  “The Emails of Natalie Portman and Jonathan Safran Foer”?

and maybe what i want is an epistolary hand-written celebrity profile.

oh, and also, now allllllll our priorities can shift… 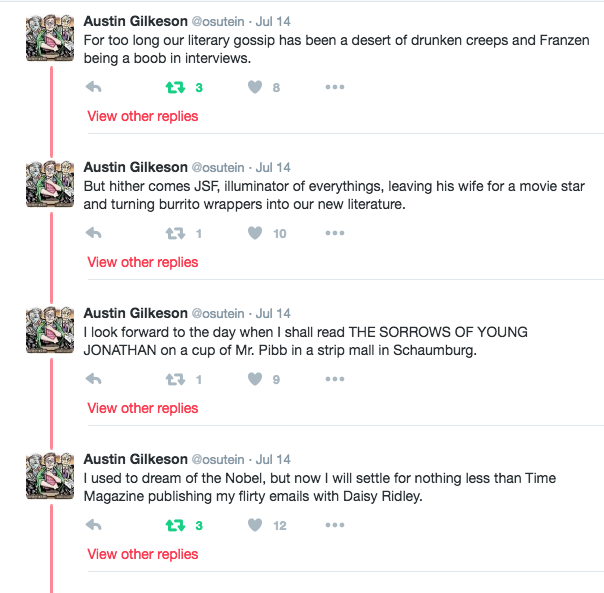