i have- quite late in the day for one writing a biography of jackie onassis- come to the late memoirs of the late gore vidal.

just fyi: in looking for pictures to illustrate my arrival at the late memoirs of gore vidal, i also arrived at this EPIC picture of young lagerfeld…

but the delay in getting to gore winds up having been a rather wise- albeit unintentional- life choice made by my 2013 self, because it is probably only now that i am ready to deal with these memoirs, having now written a narrative so steeped in ambiguities that the word ambiguity has taken on ambiguities and, the other day, i had to double-check the definition. 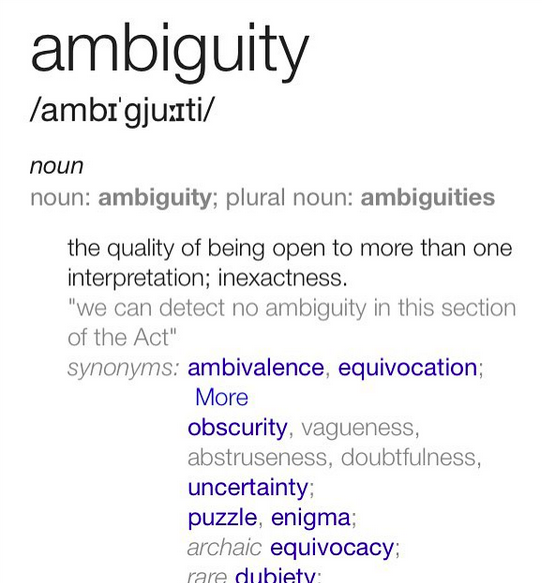 to build on my prior contention that we never know anyone, not even ourselves, and we are all going to die…

because i am obviously in the business of lifting spirits… let’s talk about gore vidal.

first of all, let’s give credit where credit is due: vidal was, like, WAAAAAAAAAAAAY ahead of the curve in his use of the word palimpsest, a word that has returned to vogue in a big big way in academic writing in the last 5 years and shows up, now, in pretty much everything. true story:

less well played? DUDE. nearly every rumor for which i have excoriated poor old truman capote in the last ten years starts with you!

arising in your 1995 memoir, palimpsest– a wonderwork no less complicated, nor less frustrating than everything ever written by my man mailer (who i have not written about much here in the last 5 years but who has- in my offline research life- become a full-on, though no less complicated for its full-on-ness, love affair, often tempered by severe loathing and self-doubt).

pages 309-312, most especially. the contents of which i was entirely familiar though i did not realize that this was their point of origin. 3 pages in which we are told that:

*jackie married jfk for his money

*she slept with william holden

*she probably slept with rfk

*because lee slept with jfk first

and that except is everything. because the frame here is this:

vidal is in a cemetery filming a scene for a documentary. pages 309-312 are described as “scenes from the Jackie play” that he lets run through his mind as the camera cuts between him and a statue. it is variously described as “the fast-moving play in my head,” the drama idling away in vidal’s mind, and, again, as “the Jackie play.”

within this scene, vidal and louis auchincloss speculate about jackie’s sexual tendencies. george mcgovern tells vidal jackie told him that she once overheard the kennedy campaign aides talking about her like she weren’t a person, just a thing, like a state.

um… vidal is a dramatist. which begs the question: how real is the play in his head?

elsewhere, rfk (not unsurprisingly given their years long fued) is throw under the bus again, when vidal describes nureyev telling him of how, once, he was with rfk and rfk’s “own homosexual impulses… were very much in the air.” vidal writes that when nureyev says this, he smiles, “very much aware, firsthand, of the swirls of gossip that envelop the conspicuous.”

it is hard to square this repetition of gossip that will, by future biographers, become fact, with vidal’s acknowledgement- or lamentation, i cannot tell- of “gossip, endless gossip, which then congeals into history,” and then 100 pages later, his deplorement of how “fantasies congeal into fact.”

reading palimpsest, i felt that gore vidal was, across the ages, deliberately trying to make my life hard.

because the tendency with nonfiction is to want to believe. the word nonfiction implies that it is not fiction, which- if you believe in fact- establishes a dynamic suggesting that nonfiction is fact and can, therefore, be believed.

there is an inclination to want to believe that someone knows something for certain. that X, Y, and Z are true.

just as one would like to think that someone is in charge and we are going somewhere.

the suggestion that the whole world is just fumbling along trying to make it to tomorrow isn’t exactly life-giving so you can see why we’d not want to think like that. but that is still there. (cue my weekly reference to “two ships”…)

“how little understanding any of us had of what was actually going on at the time,” vidal writes, reflecting upon the administration of jfk. but really, how little any of us ever knows. and, therefore, how desperately we want to imagine that someone does.

i want to believe vidal.

i do not believe it is coincidental he makes that terrifically impossible.

declaring that he never reads anything written about himself, he spends much of palimpsest critiquing his appearances in the memoirs of his friends.

vidal has much to say about novels and biography. contending that the novel has ceased to be read or give pleasure, biography has become “mega-fiction sometimes posing as gossip.”

gossip and history are major themes as well but, in his memoir, vidal is surprisingly silent on memoir. lamenting a capote line misattributed to him, vidal supposes that “what others want you to be you are going to be, despite all evidence to the contrary.” then he promptly tells us what to think of everyone else.

the advantage of reading palimpsest and point-to-point navigation in quick succession is that the repetition stands out in extreme relief. whole stories are repeated though they differ slightly in the details and the telling and so they seem not to have been straight-forwardly lifted.

is this intentional? or a fluke of the passage of the intervening 10 years? did vidal re-read palimpsest before writing point-to-point? WHAT ARE WE TO BELIEVE???

bizarrely, i trust mailer in a way that i do not trust vidal. mailer gives the impression of letting it all hang out. vidal is… sneaky is the word i’m coming to though it is perhaps not the most precise one. with mailer, the joke is a shared one. with vidal, i’m pretty sure the joke’s on me.

the thing i struggle with here, the ambiguity that i keep picking at, trying to figure out, is the contradictions between what vidal is preaching and what he is doing.

how he can, on one page, decry the things said by capote but attributed to him, and then, a 100 pages later, surmise that rfk was bisexual because nureyev said that, on one occasion, he felt something “in the air.”

(srsly, had i known how much time i would spend as a biographer parsing the things that people felt in the air, i might have opted for a second career in meteorology.)

it’s hypocritical, and i mean that in the best possible way. for, it is an artful hypocrisy. a maddening one, as well, because vidal’s memoir gets taken as history.

there is an (intentional?) hilarity in reading palimpsest now, the irony of vidal’s complaints of how the biographers are beating down his door because everyone he ever knew now has a biographer as, in his text, he lays out a buffet of unverifiable biographical gossip on which biographers will feast for decades to come.

this is actually what i perceive as the great value of vidal’s memoirs and why i find the word “memoir” deeply problematic. it’s a word i use for lack of a better one, though i think that when we pretend there is a “face-value”- which is what, to me, genre classifications imply- to be had in the nonfiction works of writers like vidal and mailer, we do those works and those writers (not to mention ourselves) a grave disservice.

just as i struggle to call mailer’s marilyn monroe book a “biography,” because that is a term that feels restrictive (not to mention inaccurate, as mailer states)- clipping the wings of whatever it was mailer was trying to do- so it seems unnecessarily confining to call palimpsest a memoir.

memoirs are always subjective and, therefore, must be taken with a grain of salt. but a gore vidal memoir? a warehouse of salt is needed, non? not because he is a lying memoirist, but because he is using the memoir form to do something… sneaky. something more. he is, i think, going beyond.

into what, god only knows.

it is not coincidental that vidal’s campaign slogan when he ran for congress in 1960 was MORE WITH GORE.

it is also not coincidental that vidal himself was uncertain of precisely what the “more” was.

(note how many times here i have pointed towards intentionality.)

in picking up his memoirs and thinking, ah, this is gore vidal’s memories of his life, we put him in a box and obliterate that more. i think what he gives us is far more complicated and, for that, more interesting.

“each culture plays the games it needs to play,” vidal writes. the same goes for people. in palimpsest, vidal brings a blend of total nudity and burlesque. seemingly complete revelation (often about other people) punctuated by certain stories (usually about himself) that vidal coyly skirts.

having read palimpsest, i know the voice of vidal, but i’ve a greater sense of what i don’t know about vidal than what i do.

as opposed to reading norman mailer’s work (and apologies to both vidal and mailer for pushing this comparison so hard but it is the one most readily available to me). mailer leaves me feeling i know the voice and the man (so well that i am thoroughly exhausted by both).

if mailer is hot, vidal is cold. to carry this equation to its inevitable end, combined, they are probably richard nixon. 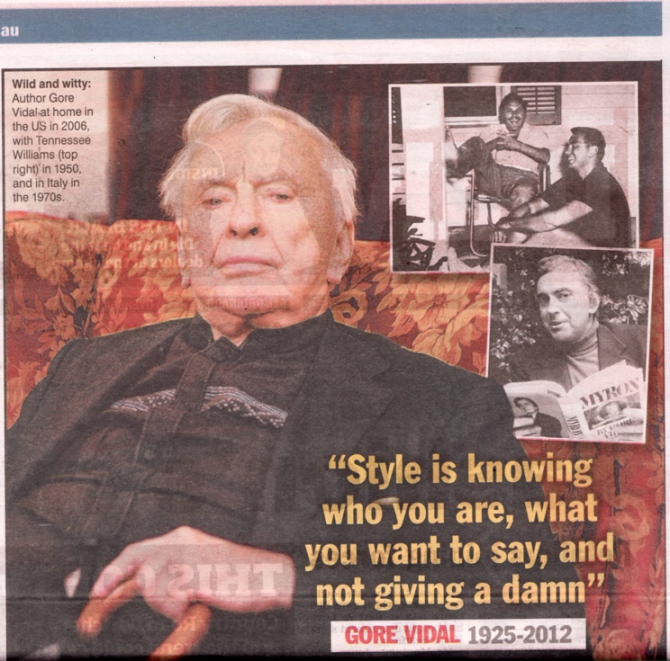 oscar wilde suggested that history was merely gossip, while the american writer/anarchist elbert hubbard (yes, uncle of l. ron, albeit not by blood) placed greater emphasis upon the story-telling and maintained that history was gossip that was well told.

jfk is said to have often (knowingly?) echoed wilde while, taking the long-view, the columnist sydney j. harris proposed that history was “gossip that has grown old gracefully.”

lamenting capote’s lying, vidal notes that “The squalor never ends once one gets involved with people for whom truth is no longer criterion.”

the squalor is equally endless when writing biography, a practice in which there are many people- with all their complexities and lies and the gaping disconnects between the things we say, the different people we say them to, the things we do, the things we want and the things we need, to name just a few. in biography, people are unavoidable. as are the resulting inconsistencies. in memoir too.

“how am i not myself?” the jude law character kept asking in i heart huckabees.

jfk is said to have once said (note how i must always inject the uncertainty- as if the man himself weren’t real and what we’re left with is just witty, scripted soundbites attributed to him by others). anyway, jfk is said to have said that “What makes journalism so fascinating and biography so interesting is the struggle to answer the question: ‘What’s he like?’”

the latter question carries the illusion of being answerable. do we keeping asking it and cobbling together replies because we will never quite know the answer to the first?

6 thoughts on “apologies to capote: history, gossip and gore vidal (emotions via britney)”