surely we’ve all been around the block together enough that i don’t have to preface my close reading of a seemingly deeply shallow thing– in this case, a fashion magazine editorial (the captions! the prices! the open mouths! the ennui!)– with a disclaimer that i don’t always take a magnifying glass to a fashion mag to study the fine print in the posters the model’s affixing to the wall, yeah? surely it’s understood by now that i’d only do that when it leads us to a cultural Deep Point? yes?

i’mma go with yes. and assume you’re with me.

anyhoo, so in the past week, steinem has suddenly been EVERYWHERE. by which i mean she is probably no more or less present in all your lives than usual but, in my own, because i’m writing about the 70s, she is increasingly, every day, coming up. 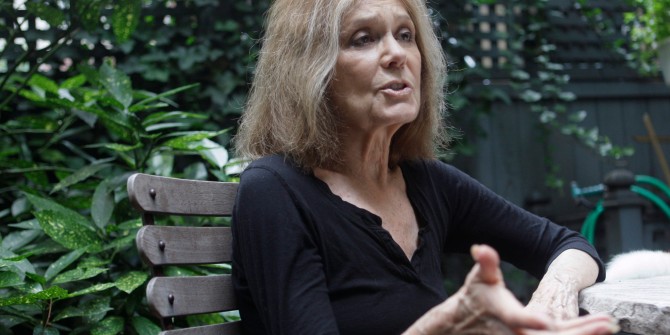 in this context in a chapter:

where i need to figure out how to encapsulate her significance in late-20th century american life in one clause.

with this fabulous quote that gives me a reason- that isn’t a total stretch- for introducing her at this point:

and in this really bizarre way in an article by someone deeply off-put by her speech patterns:

so steinem’s been floating around in the general flotsam and effluvia that surrounds one when one is writing a biography of someone who lived during steinem’s times.

kind of like how if you write about britain in the 1940s, the mitfords are inevitably going to come up- if not the whole lot of them, you’ll at least run into one or two at emerald cunard’s.

except there were five of them and only one of steinem, so this is an impressive feat, to be floating to the surface of a narrative that isn’t your own with such frequency.

all of which i would never have thought to write about had not a friend directed me to a steinem-related fashion editorial in this season’s issue of porter. 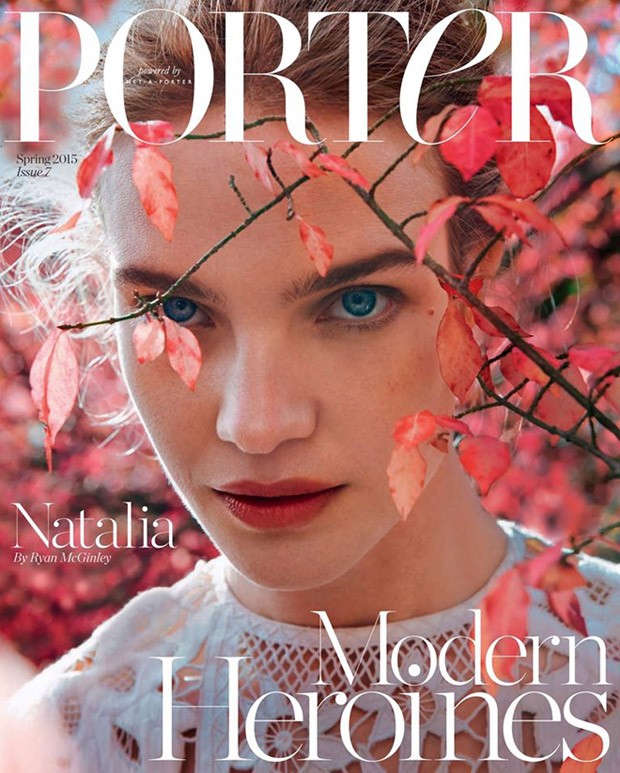 confession: i’ve the sense this is psuedo not allowed, so i’ve purposefully taken crap images for the purposes of our discussion here. if you’re all like, OMG I NEED TO SEE THE STUDDING DETAIL ON THOSE £150 JEANS!!!! by all means, go forth, buy this issue of porter and enjoy the pretty pictures in high quality.

because they are very pretty pictures.

but. BUT. and you know how i love solving problems so you probably assumed from the get-go that there would be problems galore here… i would say it isn’t so much a galore as a PANOPLY of problems. specifically with the way steinem is being evoked. let’s take a look…

oh yeah. first. this is gloria steinem, at the Women Strike for Peace and Women Waging Peace Organization Luncheon in new york on 8 june 1973. 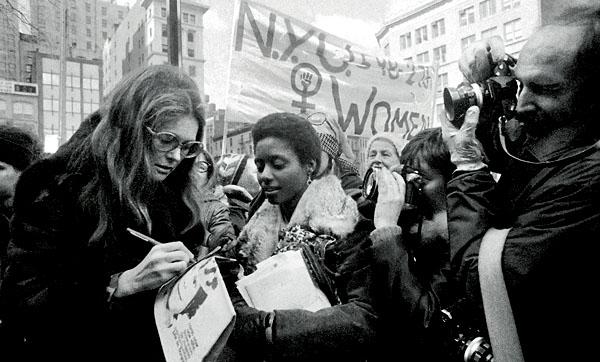 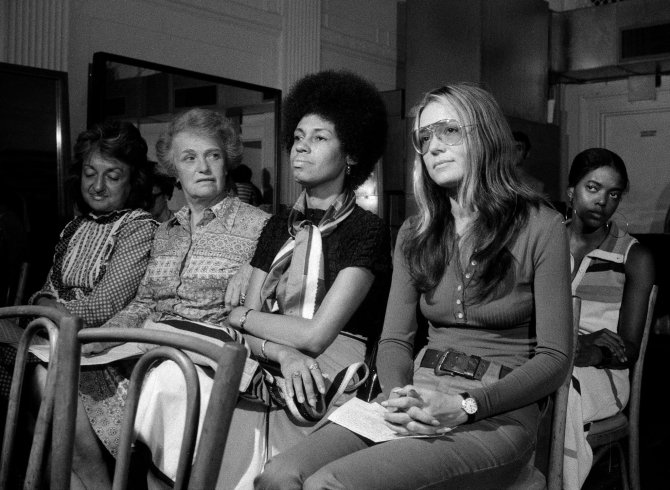 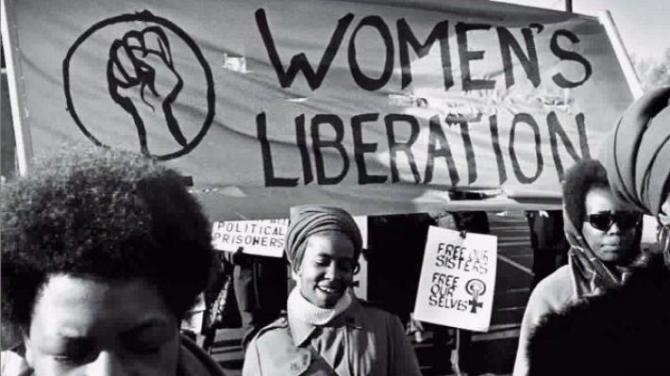 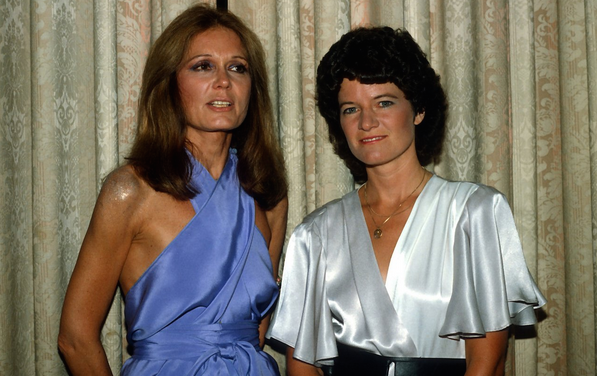 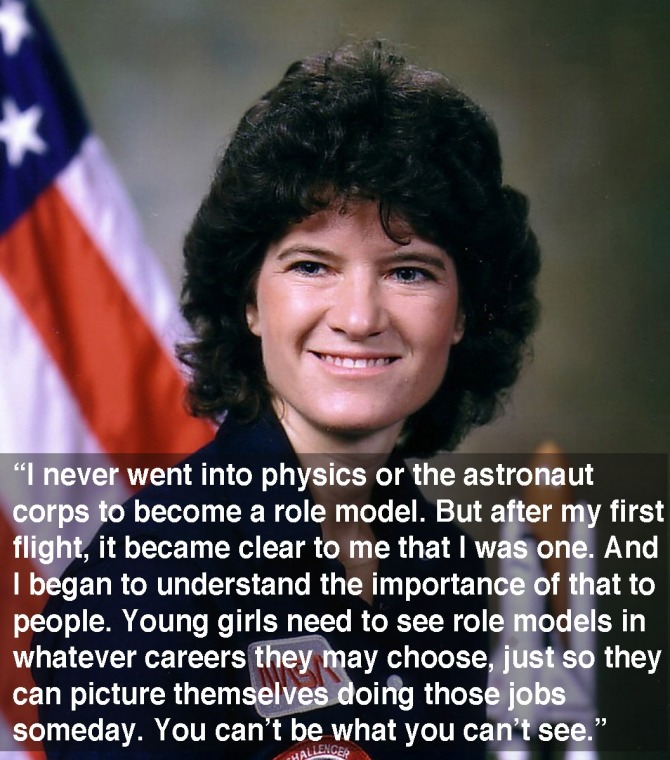 and back to steinem… 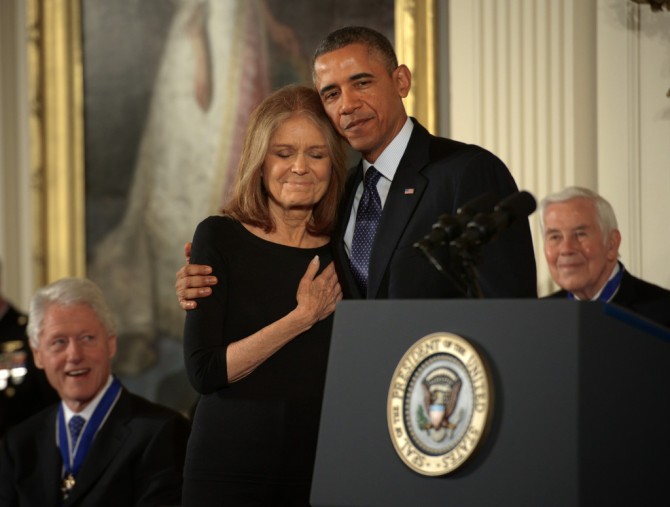 so steinem’s a big deal. she’s not THE ENTIRETY OF THE WOMEN’S MOVEMENT, mind you. but she’s an important figure in the women’s movement and in women’s history in the US in the last century. and she continues to be a powerful (and divisive) voice for equality today.

i’m guessing that is what the team at porter were going for. at their editorial meeting, they were all like, STEINEM ROCKS! LET’S MAKE A TRIBUTE!

and, of course, because porter is a fashion magazine, the tribute would be one framed in terms of fashion.

and, because the end game of fashion magazines is to sell luxury goods, this celebration of the fashion and style of gloria steinem as explored in the pages of porter would involve some swanky stuff.

in particular, i would point your attention to these four things:

* the title of this is “the way we were”, a phrase suggesting that this is nostalgia and we have come a long way from here, whilst also harkening to the barbra steisand/robert redford movie where the smart, liberal, activist woman with the wild hair lost her man.

which, if you don’t remember it from the way we were, perhaps you will remember from this.

* “a clarion call to women”

i’d also encourage you to read the steinem quote up there in that intro page as it’s the last we’ll see of steinem in this piece.

which brings us to the piece itself. which, call me cynical, does not make feminism, activism or womanhood look particularly fun.

basically, i’m deducing, it involves a lot of standing around and wearing sunglasses indoors… 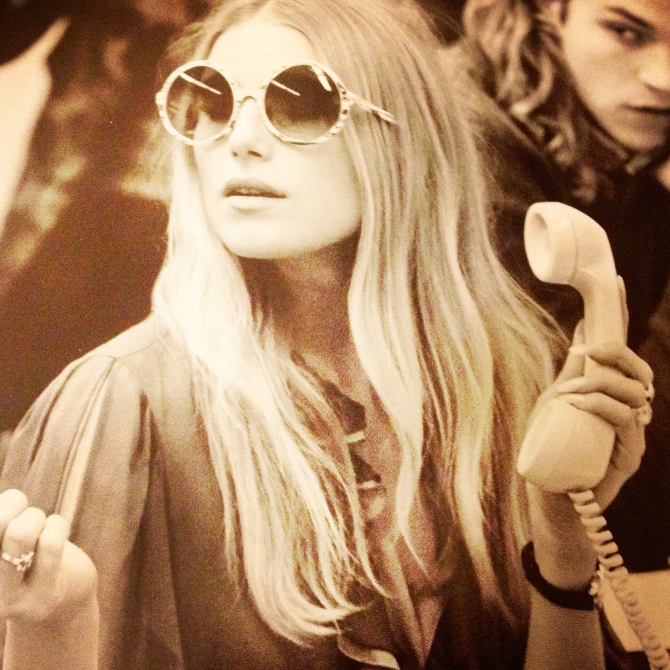 and maybe every once in awhile hanging a poster…

before collapsing from the ennui…

(fyi, the only words i could make out other than “MANIFESTO” was the phrase “SHE IS HOT”)

and yeah, there are some dudes here. 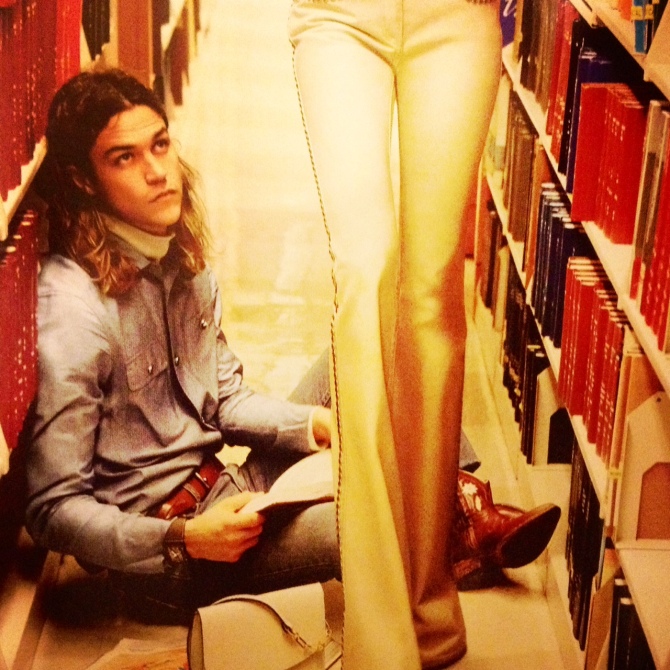 equally decked in pricey things and just as stricken with ennui.

activism = exhaustion. stylish exhaustion, yes, but exhaustion all the same.

in reality, activism can look like this. yeah, you talk on the phone and hang things on walls and look at books. that happens. and, as is the case with so much in life, there are many times where there are things in your hands, so that your jewelry is shown off to best effect…

activism is all about clipboards, you guys. 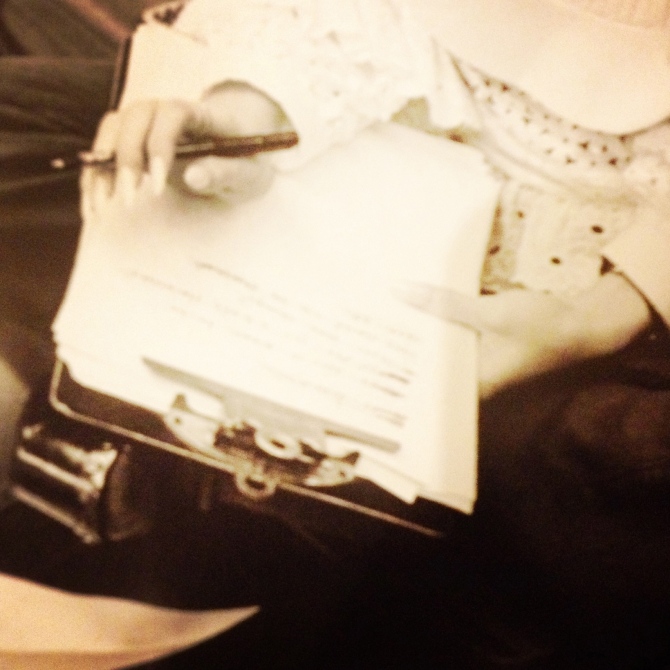 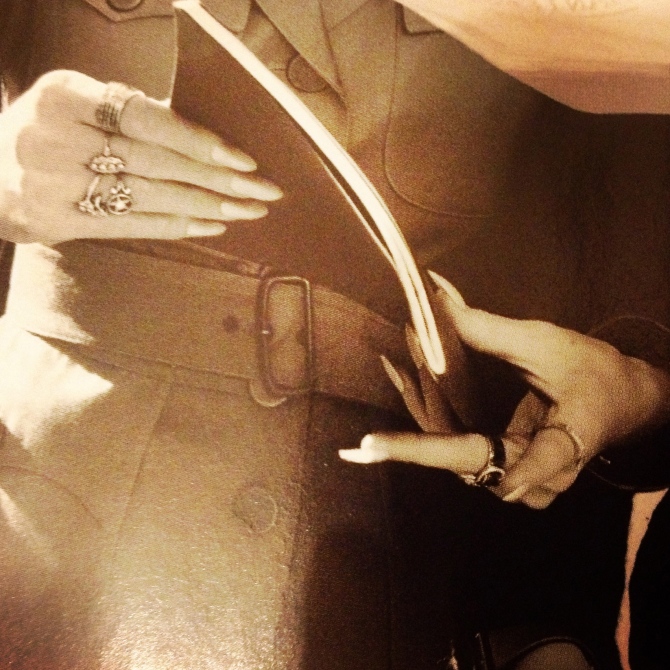 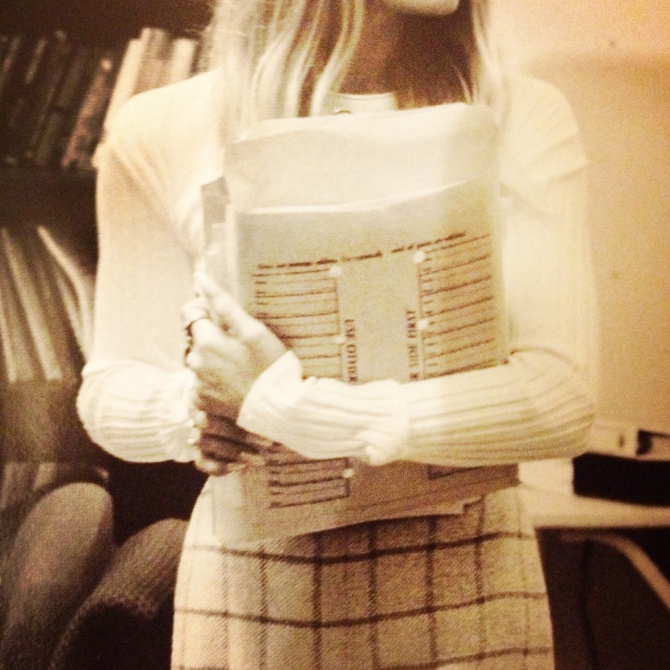 but where are the rallies? i want to see legislation. for some reason i thought the “liberating agenda” was going to lead to legislation. not to the admonishment that i should… 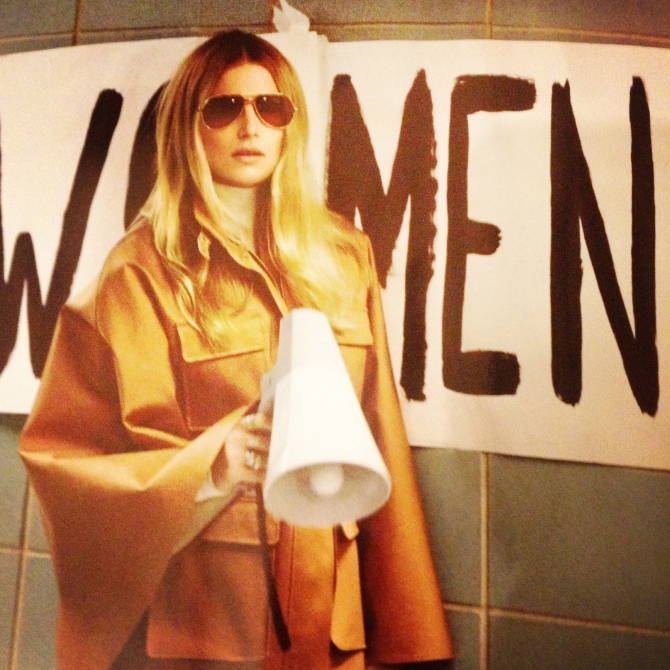 to give credit where credit is due, there was an amendment to this sign. if you’re doing a deep reading of this editorial, perhaps you’d notice this:

again, call me cynic, but i assume it’s only there to lure our eyes down to the model’s £1,430 tom ford platforms and £11 calvin klein socks.

so this isn’t entirely ahistorical.

these model’s were photographed open-mouthed… 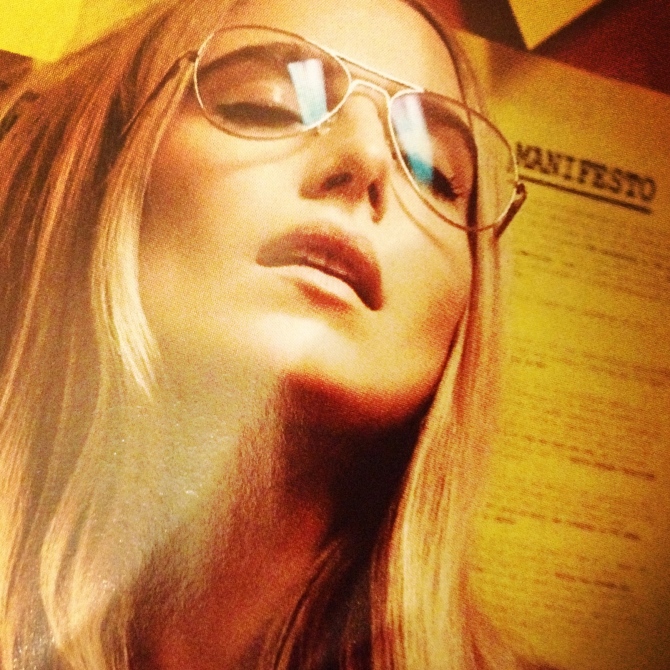 as is pretty much everyone in public life… 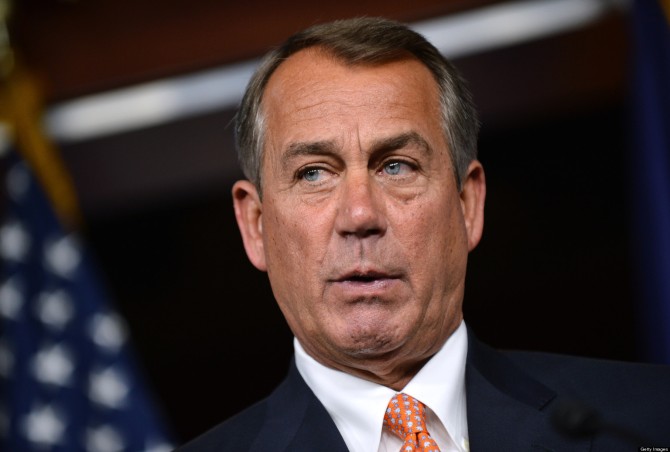 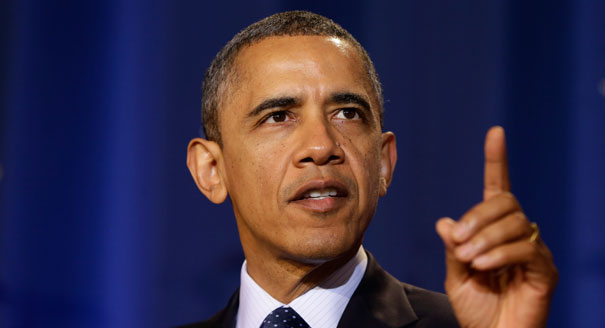 but who would you think gloria steinem was from viewing this editorial? 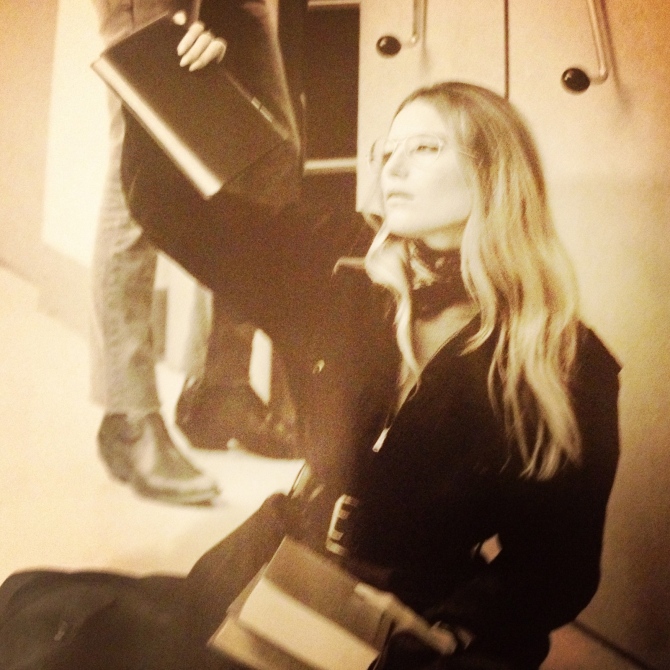 if you’re thinking she was someone who occasionally opted to sit on the floor, well, yes.

but, as a biographer, i’d caution us not to read to deeply into the fact that someone occasionally opted to sit on the floor.

you’d have a pretty good notion of how she looked in the early 1970s, in terms of long hair and sunglasses. you might assume she liked to do menial office work and carry clipboards. and from the quote, you can deduce she liked to imagine and dream and plan.

but who was she?

among the many things that annoy me here, what annoys me most is the title.

the way we were.

were it called anything else, the feature would still be offensive simply because it’s so utterly tone-deaf. but under a different title, though it would still be a sexist way of celebrating a feminist icon, it wouldn’t carry the implication of the past.

that is what bothers me. that, in the context of celebrating steinem, one would do so with a mere two sentences of her own words within a 12-page fashion editorial that includes this caveat:

the subtext being: LADIES, SHUT UP AND SAY IT THROUGH YOUR SHADES!

i know, i know, it’s a fashion magazine. but as someone who rather loves fashion and thinks we should all be collaborating at every possible level and every discipline to change the world through the development of stories about lives, this strikes me as an opportunity missed.

it was bold that they used steinem (though it would’ve been bolder to use bella abzug). it is disheartening that they used her in such a stale and unilluminating way.

it’s delusional to pretend this is the way we were when, in reality, it’s the way we are.

3 thoughts on “steinem and porter: a close reading of a fashion tribute to a feminist icon”