we saw this coming, no?

am i an idiot for entertaining the hope that the daily mail might write about this woman in her own right? is it naive of me to have been bothered by the fact that- because “george’s lady” is so serious- her seriousness is being translated into clooney’s wanting a political career? (as in: the only reason a hollywood star would marry a serious woman is because she fit the bill for a career change.)

before we dive in, i’ma lay all my cards on the table and point you towards an article in the guardian the other day on HRC’s scrunchie. as the author there writes: “we simply have no template for how a clever, serious woman should look.” which is the problem at the heart of why i keep coming back to amal alamuddin.

this is, we’ve been told (and can believe, because she’s one of the top human rights lawyers in the UK) a smart, clever woman.

yes, she wore these crazy pants i would never wear. 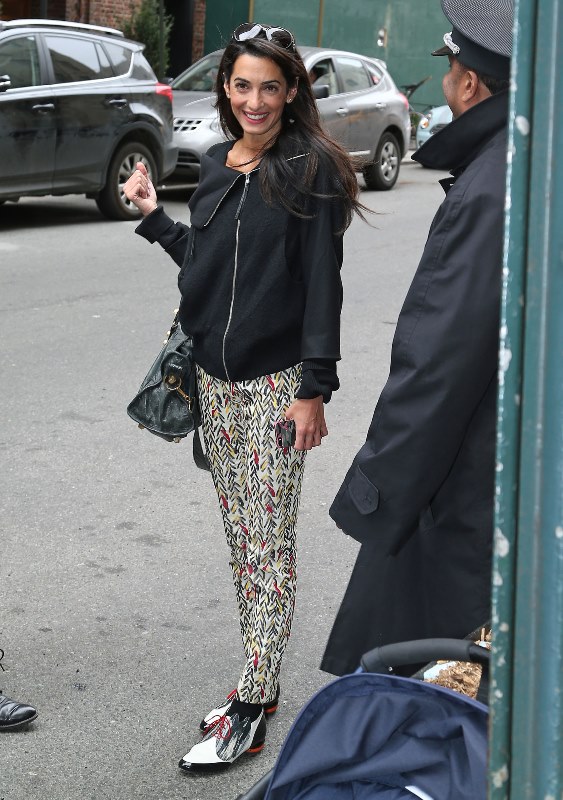 and she is engaged to george clooney, who is far more famous than her and famously said he would never marry. 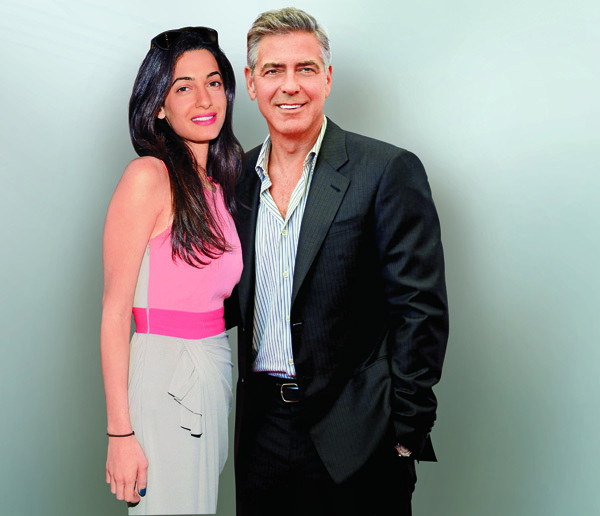 but that doesn’t detract from the fact that she’s a smart, clever woman. she’s something more than “george’s lady” or “clooney’s fiancee.”

so the reason i’m writing about her is because while, yes, she highlights the fact that we don’t know how smart, clever women should look, we also do a shite job of writing about them.

check out that “in spite of”… it comes back again.

OMG you guys, there were SO MANY beautiful people at this event about a serious thing!!! jolie was there too…

lest you think the men are excepted from this scintillating fashion reportage, they’re not. brad pitt was there and he was, we are told, well dressed too.

srsly, you’d think this was fashion week, right? rather than a global summit to end sexual violence in conflict.

presumably this also has to do with the way the press covers “stars” versus the way they cover “serious people” as there’s no mention of william hague’s suit. we’re simply told that he arrived with pitt and jolie, as though their presence was his best accessory.

disheartening? yeah. it gets worse.

based on this picture, how PSYCHED is alamuddin to be working?

do you think she loves her job?

mind you, it’s purely a matter of context. the daily mail has paired a photograph where alamuddin looks bored out of her mind and appears to be scanning the room for someone she knows with a caption that suggests that the photograph depicts her working.

context is key. the caption implies that this is what it looks like when a woman is working and that this is a photograph of this woman working.

most likely, none of those things are true. this is probably a lull in the conference where she chose to look around the room rather than look at her phone, as the two men next to her are doing.

i’m sure that, in the day to day, alamuddin’s work looks a lot different than this, but this is what we’re getting in the press and so this is what we know. oh, and this:

“we simply have no template for how a clever, serious woman should look.”

and so we portray a human rights lawyer as a well-dressed administrative assistant at a summit of beautiful people. not cool.

btw, this summit? HUGE BIG DEAL. and because it didn’t quite fit in the discussion above, i’m sorry to bury it away at the bottom here, but did want to get it in nonetheless… jolie’s speech:

4 thoughts on “checking in with george clooney’s fiancee, wedding planner”