so i went to the isabella blow exhibit at somerset house the other day. which… well… omg, GET THEE THERE.

because it’s amazing and beautiful and an extraordinarily well curated glut of a marvelous mess. but because i think it’s also doing something rather extra-ordinary in terms of life narrative.

lately, i’ve been thinking a lot about lives and the shape of lives. an odd way to spend one’s days maybe but i am, after all, doing a phd in life writing and, ever since watching this video wherein hermoine lee had a throw-away line to the effect that OBVIOUSLY one wouldn’t dare suggest that a life had a shape like a work of art, to which i thought, um… yeah, i would, it’s been extra vair vair on my mind.

so i came to the isabella blow exhibit mulling this: how a life is shaped, how we shape our own lives, the art of a life, a life as art.

what i didn’t come to the isabella blow exhibit with was the expectation that it would be provide a useful extrapolation on the role of life narrative in a museum context… how have i never considered this before?

is it because my audio-guide didn’t work well at the bowie exhibit?

because how can you know the potential of something until you’ve seen it done well?

when i was 13, i read wayne koestenbaum’s amaze-balls jackie under my skin for the first of an infinite numbers of times. truth be told, i understood maybe 1/5 of it (if we’re being très generous), but prose-wise, it was like being blown from kansas and waking up in oz. the rigor of his words, the pluck with which he put the language together, the dexterity and confidence and forward throttledness with which his words moved- paced like a drag-race and yet, even then, just reading it you knew they’d been intricately, painstakingly laced together with the precision and delicacy and strength of an elaborate and advanced feat of ballet.

i was 13 and curled up on our chair-and-a-half watching re-runs of 90210, reading koestenbaum during the commercial breaks because i could only handle the work in five minute intervals.

my eyes weren’t quite old enough to sustain the full brilliance of what i saw.

which pretty much captures how i felt in the hours after seeing fashion galore. 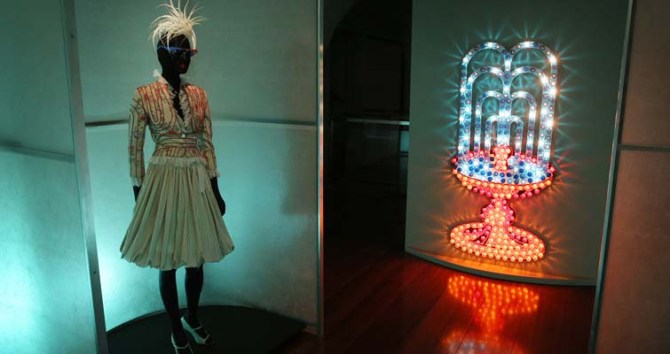 so, because i’m forgoing the urge of 1 and holding out for 2, let’s talk about the things i want to hash with the friend in 3… 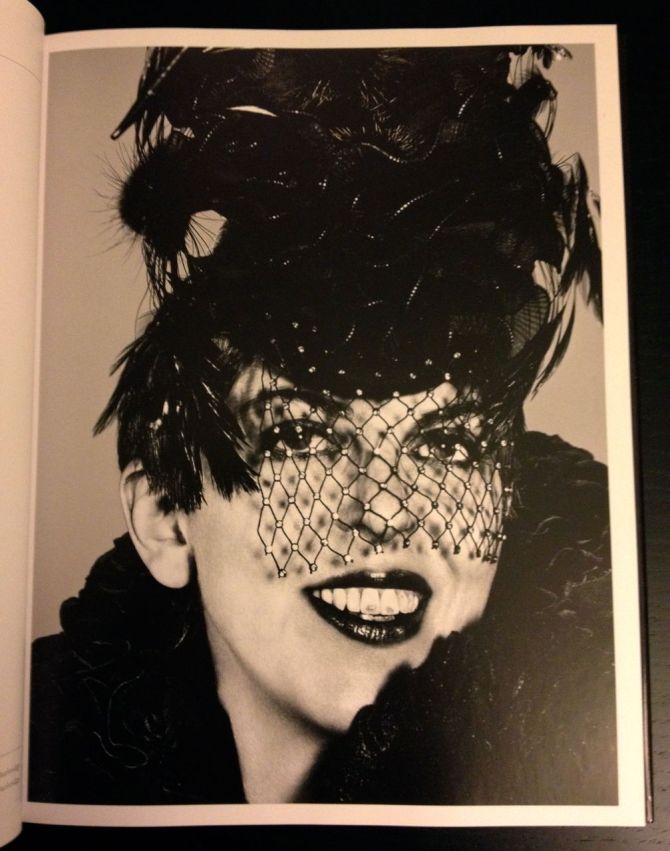 i’m not sure where i first heard of blow. somewhere in the midst of one of those internet wormholes where you wind up twelve stories away from where you started and stumble upon a gem. presumably alexander mcqueen led me to her, but all i remember about that moment is that she is the first person to whom i’ve ever actually heard the term jolie laide applied. and where i actually understood what that meant.

the tribute to her in the new york times is righteous. read it. now. HERE.

did you read it? no, really, did you??? (DO IT!!! you need only click on one of these links or the photo below…) this is the header… are you compelled?

the quote i find most beguiling from the NYT piece is from daphne guinness: “Nobody knew how to quantify her talent.”

and i think the exhibition at somerset house was so striking because it seemed to be doing precisely that. an exercise in quantifying an elusive talent. which is a boring, academic way of saying that it was attempting to building a narrative around a life so that the life’s meaning would not be lost. which is still a stuffy way of saying that it was doing something really freaking cool.

one of the problems in writing a biography of a female subject is that women’s accomplishments, particularly the further one goes back in history, look so very different from the accomplishments of men. meaning, what signified, for the individual, an accomplishment might not appear as such to society at large. for instance, to lean on jackie, going to a sex movie or venturing outside the house without a bra. that is, in its way, an accomplishment. as is having a job as an editor and becoming financially independent.

to bring this back to blow, she had a career in fashion, but her contribution extended far beyond that. she wasn’t a muse so much as a mentor, an enthusiast, a supporter, and a friend. which is a mighty difficult thing to memorialize in a museum exhibition. and yet, somehow, it works here.

it succeeds perhaps precisely because blow was such a lively, whimsical figure and the show itself is brimming with her attitude and her self.

for blow is insistently present here. right down to the rolodex, the fake eyelashes and the used tube of red lipstick.

the inclusion of such intimate objects brought to mind the 1999 christie’s auction of marilyn monroe’s personal effects, including clothes, books, notes, and monroe’s make-up case… 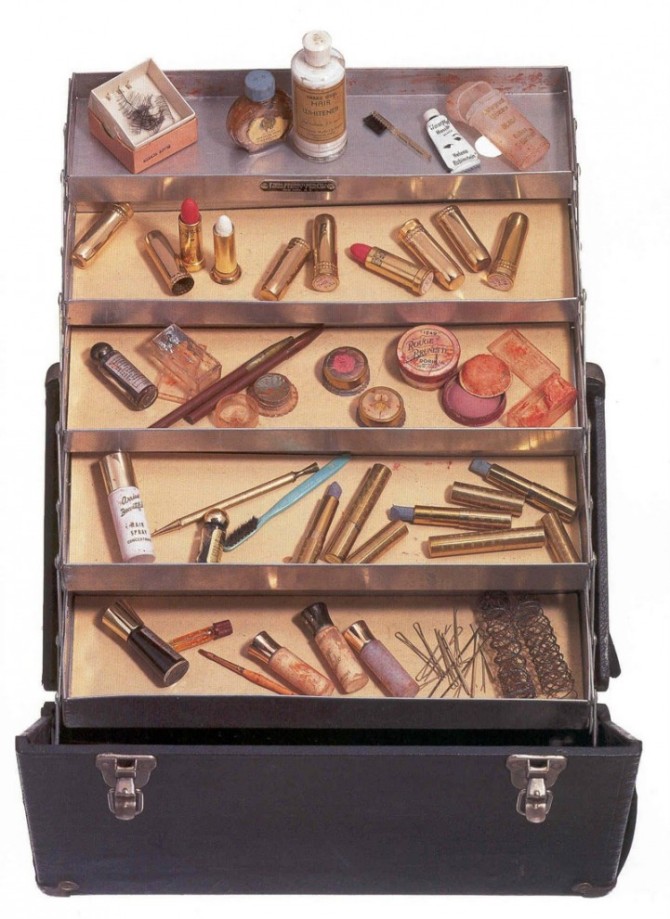 but just because you’re showcasing personal things doesn’t mean they feel personal to the viewer. in the case of monroe such belongings seemed sad, but they seemed vibrant characterizing touches in the exhibit dedicated to blow. regardless of the fact that monroe may have killed herself and blow most certainly did.

is it that monroe’s effects are so bogged down with biomythography that they’re automatically rendered pathetic whilst blow’s, less burdened, are beguiling?

or is this merely to do with the difference between text and object?

OR does the difference lie in curation? 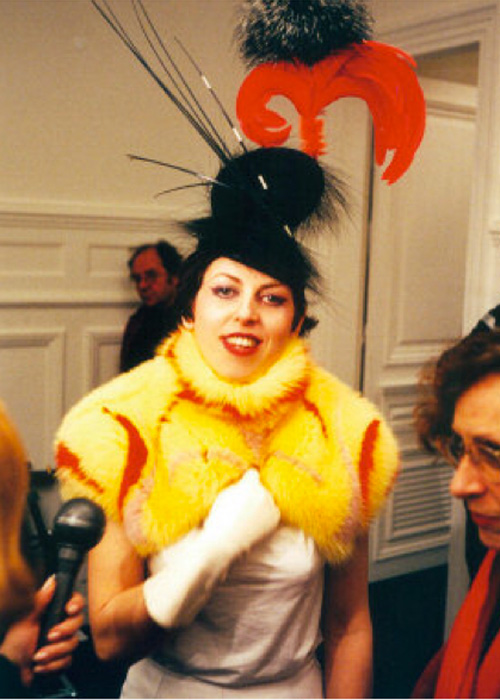 about half-way through through the exhibit, i realized that the mannequins had heads. which seems obvious. but is it? in the jackie kennedy clothing exhibit (circa 2000-2004), the majority of the clothes were free-standing.

with the occasional headed figure thrown in…

a figure with hair and a nose and maybe (it’s hard to tell from the pictures and my memory doesn’t serve me well here) shadows or dents for the eyes and mouth, if anything at all.

this, obviously, does not look like a real person. can you see the family resemblance?

i didn’t make it to the valentino exhibit at somerset house last year, but there appear to have been some strides made in mannequin realism since the early aughts.

still no eyeballs, but they have more of a face, even though they appear to be at a debutante ball in a catacomb…

i mention this because there’s a room in ‘fashion galore’ that’s kind of amazing. because the clothes are very very, but also because blow’s face has been put, like a mask, on the mannequins.

it took me awhile to realize this and you can’t really see it here. but the effect is AMAZING. in a show where it felt like the subject was already insistently, ferociously present- rather like she was flitting about a few steps ahead of you as you moved through the rooms, a constant tease, just off in the distance- suddenly THERE SHE WAS.

in a way that wasn’t even remotely creepy and seemed a seamless part of the show.

it was just time for her to show up and she did.

this is, in large part, why i want to go back. for this moment. where, after essentially walking through her closet, you happen upon her.

the encounter was mesmerizing when i realized what was happening. but now i want to know how it happened, want to understand how the exhibit up to that point was building toward that moment.

it’s an exhibit wherein a life is narrated through objects. and, while we life-writers don’t have the luxury of the tangibility inherent in a pair of false eyelashes, that doesn’t mean our subjects can’t be so present, that we can’t at least attempt to draw the reader that near.

how to do that? i’ve no idea. and i may well spend the next three months returning to this idea here, because it seems this is what the winter is going to be about.

and maybe i’ll just wind up going to this exhibit twenty times for nothing, but i do think there are people who live their lives as though they have a shape, as though they were art, as though the act of living were an art. and the really interesting thing to try to figure out as a biographer is how, in turn, to artfully write those lives.

2 thoughts on “a mish-mash of impressions about life writing/shapes/curation, and artfully lived lives as art, as relates to the somerset house exhibition “ISABELLA BLOW: FASHION GALORE””