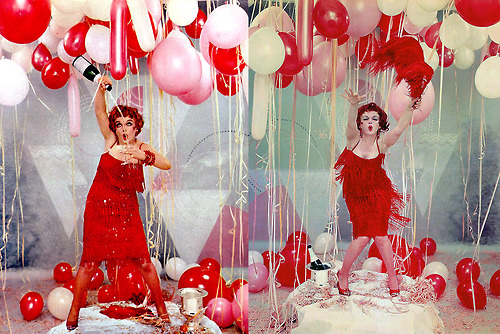 at the age of 14, before ebay was ever invented, this girl begged her parents to take her to antique stores and began funneling all her lawn mowing money into vintage tabloid magazines.

at 15, she won tickets to the sotheby’s auction, but considered going to new york so outside the realm of possibility that she never thought to ask anyone to take her.

at 18, she wrote lee radziwill a fan letter.

at 21, because she really really wanted to write about the virgin suicides but couldn’t find anything valid to say, she wrote the 10th chapter of a non-existent jackie biography for her master’s thesis.

at 22, she was living with her parents, had $16 in her savings account and the job of “applebee’s waitress” headlining her resume. thoroughly demoralized, she began writing the rest of the non-existent jackie book.

when she did get a job, the girl went to work at 7 a.m. so she could get off at 4 and go home to write until 10. the day before her 24th birthday, which was also the day after her cat died, she finished.

her boyfriend, in detailing her various inadequacies during The Worst Break-Up To Have Ever Taken Place At A Rogue Wave Concert, leaned back in his chair and, taking a sip of PBR, said, and then there’s your strange obsession with jackie…

he compared her to the jimmy fallon character in fever pitch.

fyi: nothing will make an ambitious biographical girl feel less sexy than being compared to the jimmy fallon character in fever pitch

the girl moved to chicago.

she sent her book proposal to 50+ agents and publishing houses during the next four years, spending exorbitant amounts on postage because she needed the confidence that comes only with fedex.

the girl wrote an article about liz taylor. it was rejected 15 times. only when liz taylor died did it see the light of day.

in may 2004, the girl began emailing a certain biographer every six months to “check in.” six years later, the biographer wrote back.

biographically, there are always two stories: the true story and the story that’s told.

the true story is the ugly bare facts whereas the story that’s told is a sweeping over-arching tale built for public consumption. it often has a moral. it does not always have an end.

in the past three months, i’ve stumbled into an odd streak of luck that has left me with the nagging sensation that i deserve absolutely none of it. i’m realizing this isn’t so much a problem of self-esteem as one of narrative.

because i’d honestly rather believe my own propaganda about the post-it and the 9/20/13 plan than confront the fact that this is, in reality, something towards which i have been moving, however indirectly and unconsciously, for the last 18 years.

the story of how i put a date on a post-it is, in its cinematic brevity and seeming effortlessness, far more pretty than my sitting in a dive bar and being compared to the jimmy fallon character in fever pitch. but these two stories are inextricably linked.

i deserve none of this and yet i’ve earned it all.